„A lot of the learning process that has to do with synaesthetic representation of semantics is called, how you give meaning, to the way your senses overlap is an essential, a core component of education.

That’s how you learn how to speak.

That’s how we learn how to walk.

That’s how you learn not to touch a warm stove.

Now, imagine what using a tablet means to the system.

It is like getting your kids to get used to worshipping something that is dead, from a neurological point of view is like letting, notwithstanding the, let’s say, potential diseases and whatever, but giving to kids a tablet to play with it is like giving them a dead cat.

Here is the episode:

We have designed a way to leverage the cloud, let’s say, as a means to increase the efficiency of the energy grid. Because the consumption produced by the cloud is by estimate dating from 2016, so pretty much outdated, already taking up 2.5 to 3% of energy consumption in Europe.

And it’s the fastest-growing energy consumer.

And one of the things we’re working on is basically using a huge consumer, which is a lot more predictable than households, consumers, right, you can turn it on and off, you can know what effect it has if you turn something off now and turn it on later.

And we sent a proposal, a technical proposal for leveraging this flexibility or huge consumer, in order to fix the energy grid to consume less, when you have less, than to consume more when you need more.

Because one of the key problems of the energy theory right now is what is called the ”duck neck problem”, which refers to the difference between the peak of renewable production and the peak of consumption in time over the span of a day.

And we can use the cloud to flick the two. And if we do that, just for one in 1000 of the energy grid, the economic advantages are huge, just one, not one person, one in 1000.

And by this sort of idea where people who buy cloud computing, get an option, you can buy it now you can stop the processing now, and you pay this fee, or you can leave the processing for when we have renewable energy in the grid. And it will be easy. If you wait, it’s cheap, and you save Earth.

And you also get a certificate saying that our computation was done using bla bla bla bla bla, and you sign it cryptographically.

And that guy or that company can put it on the website and say look, 80% of our processing is done, not in a carbon-neutral way, in a carbon-negative way.

Because if you reduce the burden on the network, you don’t just use how much carbon you emit. But you also eliminate the need to produce carbon to offset that balance by conventional means, because the way that the way this balance is settled right now is by burning gas when you don’t have energy.

So basically, we have a lot of renewable energy, but we don’t have it when we need it.

And we don’t know how to make batteries, but we know how to turn the cloud into a battery, a negative battery.

But for technical purposes, the negative battery is just the positive battery or a different type. – Bogdan Bocșe, CEO @ Knosis.AI

Here is the episode:

All AI solutions, which are trained exclusively with data coming from a single human person, are biased.

So basically, if you take the word of any single person, you are biased.

So basically, all the solutions that are using judgments or labels or supervision of any sort from a single person per case are by definition of the word bias, and we have solutions for this.

And we have a solution that instead of avoiding bias, measures the types of bias that are being experienced. It actively tests the user request to trick the user of having a biased procedure.

And I will give you a very simple example of a prototype that we built. We haven’t deployed it yet for the customer, but maybe we’re lucky this year. We have this solution for augmenting data and measuring the bias because we wanted to use it for measuring consecutive bias.

We don’t have this product yet. We have a lot of other projects. I won’t do this marketing campaign right now, but the idea is like this, we go to a company and go like:

Do you want to know what sort of biases your Executive Board has?

Cool! Give them this link.

And that link gives you a series of very boring administrative tests: look at some resumes, read some e-mails, but it’s booby-trapped.

Also if you click on the picture from a CV, you are biassed.

If you click, if you express intention of seeing, you are biassed.

My girlfriend always makes fun of me:

It is my job to protect myself from being a sexist. – Bogdan Bocșe, CEO @ Knosis.AI

We are glad to announce that we join forces with Măgurele Science Park community for a fruitful partnership that will bridge the gap between the business and academic environment.

At Knosis, we are passionate about transforming the fruits of state-of-the-art research and innovation into real-world use cases, which deliver measurable business value.  Knosis.AI offers access to a marketplace for Augmented Artificial Intelligence (AAI) in which human attention and knowledge meet Machine Learning algorithms, creating Hybrid Intelligence capable of encoding/decoding, classifying and processing visual and textual patterns, and (semi-) natural language processing (NLP). Thus, Knosis offers a HUB for AI, where you have access to:  Our expertise is a well-knit puzzle of machine learning, data integration and management and service-oriented enterprise IT architecture and development. As the boundary between human and digital consciousness becomes more difficult to navigate through, modern workers want to acquire skills that give them long-term personal and professional autonomy. This is why Knosis uses a technology that is being patented (Human-to-Human, Human-to-Machine, Human-to-Machine-to-Human, H2M2H) to combine the two learning streams. Thus, people help the AI to learn, while the AI help people to develop automation & scripting skills and learn common expressions in a user-friendly environment, without the need for coding skills and knowledge, so that attaining digital and coding skills becomes a natural and social process. Therefore, we are looking for partners to join us in this journey. Our vision is to remove the barriers between human and artificial intelligence. We believe in a world of equal access to information, in which the goal of innovation becomes sustainability of life, culture, education and environment. 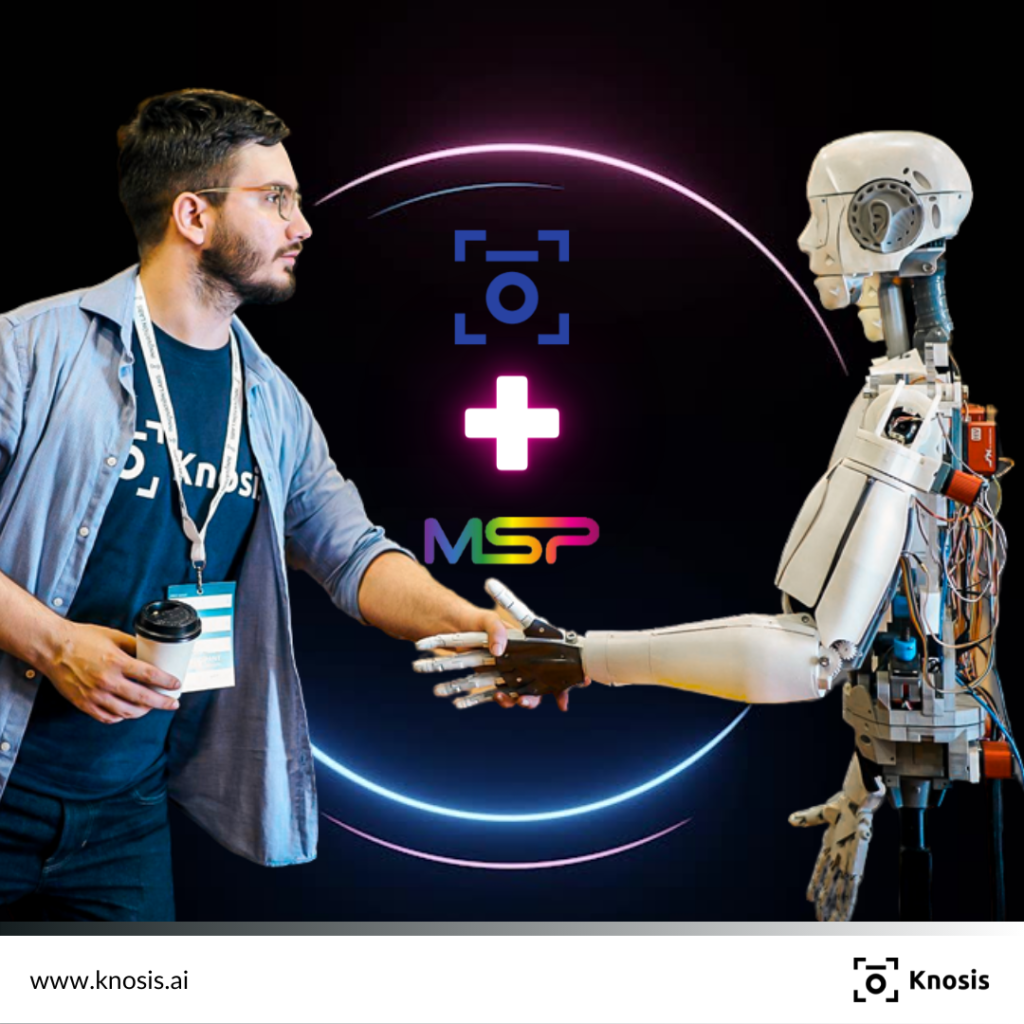